I can’t say that I’ve ever yearned to wash my cinnamon scone, almond bearclaw, or iced cinnamon roll down with a frothy brew. But Hall Street Bakery, the sister location to Wealthy Street Bakery, has done its best to persuade me. Situated on the corner of Hall and Eastern, the bakery’s location is just as experimental as the notion of serving booze with baked goods. 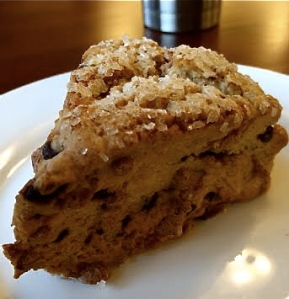 As a youth who attended elementary school in downtown GR I often indulged in a slice of grilled focacia bread or a coconut, walnut, chocolate island cookie as an afterschool snack. However, after learning I was allergic to all wheat and dairy filled items, I longed for my favorite childhood bakery to offer gluten free goods so I could continue to satiate my gluttonous cravings.

The opening of Hall Street Bakery has responded to not only my desires, but also the urgings of the gluten free and vegan community in Grand Rapids. The bakery has incorporated a separate kitchen that satisfies all requirements for those suffering with celiac disease and other similar allergies.

Gluten free items are always covered in order to protect from contamination.

While many aspects of the Wealthy Street location were used in the recent design there are a few differences. Hall Street Bakery has sit-down table service, enclosed outdoor seating for balmier weather, and a small beer and wine selection anomaly.

The Beer City USA title may have convinced Grand Rapids shop owners that every customer is looking to quench their craft beer cravings. However I think the line should be drawn at café/bakery. While their beer/ wine selection is diverse with four red and white wines, draft beer (Brewery Vivant, New Holland, Founders and Bells), and bottled beer (Coors, Heineken, Leinenkugel and Miller Lite), I will still be found saturating my almond biscotti in a dark roast instead of an ale.