In the 1930s hobos riding the rails across America developed a complex system of marks to let other hobos know where they could find a kind heart or a warm pie. In the 1970s street kids in New York’s boroughs developed a similar system of marks calling out, like a shout into the urban darkness that they were, in fact, alive and relevant.

In years past, during Grand Rapid’s leaner times, graffiti seemed like a crime not worth committing, and the notion of street art was primarily a vehicle for youth organizations, church groups and urban renewal programs. These street murals, found in some of the city’s more eccentrically bohemian areas, were painted during the 80s and 90s as means of beautifying a city struggling against decline.  One such mural exists along a stretch of Lyon Street on the border between the Eastown and Heritage Hill neighborhoods. The mural, painted by a group of young neighborhood artists, depicts colorful scenes of community life. The mural serves as a sort of cultural artifact in the neighborhood, and its African American figures with their late 80s hair and clothes give visitors some insight into the people who once lived in the area. Murals like the one on Lyon Street can be found in various locations in Eastown, and their exuberance and charm speak to both the youthful need to be heard and the human desire for beauty. Local folk artist and gallery owner, REB, is responsible for quite a few playful murals along the cobblestones of Wealthy Street. A Grand Rapids resident for more than 20 years, REB’s work borrows from folk art traditions of his home state of Louisiana, and its immediacy and humor fits nicely in the countrified urbanity of the city.

Taking a clue from the city’s community mural history, a new crop of large- scale mural works have also popped up in the downtown area in the last few years. Spurred on by the success of the annual city-wide arts festival, Art Prize, mural artists have seen fit to utilize the sides of buildings along Division Street for creative output. Division was once a hotbed of petty crime, drugs and homelessness, and while those elements still exist, a thriving arts corridor, featuring small businesses and galleries, has brought some new vibrancy to the area. The six-story mural on Division and Pearl was an Art Prize entry in 2010 by Chicago-based mural artist, Jeff Zimmerman, and its surreal narrative, depicting floating faces, abstract shapes and appropriated imagery is a kind of gate into the heart of the city. 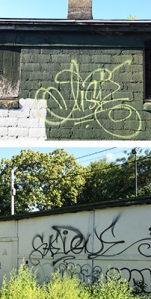 The tradition of ‘tagging’ and ‘piecing’ haven’t quite made it to Grand Rapids. Tags are few and far between, with the majority of the work being focused downtown and in the Eastown area. There does not seem to be a definable community of graffiti writers or street artists in the city. In order to thrive, Graffiti and street art often requires an infrastructure of people who understand the codes and can decipher the language. The spotty frequency makes the tags and street art moments resonate in a way that they would not in a city like Chicago or Detroit. When you see a tag in Grand Rapids, it feels like the work of a true lone wolf, and because of this, it seems more purposeful and meaningful.

Where traditional graffiti is sparse, historical and handmade signage is plentiful in Michigan’s second largest city. Once a hub for rough and tumble industrialism, the city is awash in ghost signage advertising working class necessities, watering holes and social clubs. One such piece is painted on the Wild Bunch biker club’s hangout on Wealthy Street. The hand-painted mural, with its grim reaper and chariots sneer at those who happen to walk by the white, boarded up structure. The mural, out of place in a neighborhood now known for pubs, organic groceries, and antiques, perfectly expresses the temperament of a city once known for timber, furniture, car parts and beer.