There is an intimate coffee shop, tucked away on the cities southwest side that I have frequented often to work on various side hustles and projects. The Bitter End Coffeehouse keeps its lights burning late into the night and through sunrise; guiding lost souls, procrastination prone college students, disgruntled creative types and wandering drunks into its inviting interior.

The original building was constructed in 1900 as the first branch of the Kent State Bank – which later became part of the Fifth Third empire, in what now is labeled the South West Area Neighbors area. The bank was built for the working class, mostly Polish immigrants, who dominated the city’s South West side and labored in the thriving furniture factories. As the factories moved to the suburbs, the area declined and the building was eventually renovated as the Bitter End Coffeehouse in 2004.

The new owners restored the building to its original 1900’s splendor and keep the building’s history alive and strong in a neighborhood that had felt the pains of neglect. The Grecian façade, leaded glass windows and restored tin ceiling, blend seamlessly with the dark, wood paneled walls, which are covered with a wide variety of photographs and artwork.

The Bitter End boasts an impressive selection of coffees, teas and other concocted variations of espresso, sugar and milk; all elegantly displayed above the counter. Drinks range in size and octane depending on the mood of the customer. The coffee house features everything from light green tea to a signature drink called the, “Bullshot”. I’ve never had the pleasure of ordering this aptly named caffeine bomb, probably because of my aversion to heart palpations, but if you need to stay awake the combination of espresso, Redbull and god knows what else, will do the trick.

Artistic coffee coasters adorn a wall of the coffeehouse

With Grand Valley State University’s downtown campus only a few blocks away and ample free parking across the street, the Bitter End welcomes an interesting mash up of personalities into the warm folds of its caffeinated bliss. During the school year and especially during finals, the inside of the shop is littered with students, heads propped up in their hands, ear buds pumping inspirational music and staring distantly into their Macbook Pro’s. Couples sit in the dimly lit corners at quaint tables whispering inside jokes and charming nothing’s. Groups of underemployed millennials gather outside on chairs outside smoking cigarettes discussing the latest indie topic. The café space is small and observations come easy, which can be a blessing or a curse – depending on your reasons for visiting.

Perhaps the only thing more varied than the clientele and eclectic conversation topics is the art work that adorns the dark wooden walls. Typical photographs of Parisian café scenes are jutted up against unique paintings of 50’s diners and old posters with beautiful typefaces. At first glance, the decor seems to be unremarkable and painfully cliché. However, if you take a longer look at the walls you’ll start to notice pieces and details that ignite your brain to light up with a question mark. On the west wall there is a small sculpture of a nose; an eye on the south wall and its partner on the east. I have yet to find the rest of the pieces that comprise the complete face but at least there is comfort found in knowing that the unknown face can watch over the shop from all directions and smell the acidic brews. There is a Gargoyle above the barista’s counter, standing watch next to the security camera and statue of a dog with a cocked leg, ready to chase any unwelcomed coffee drinking miscreants through the door. A unique illustration of a Skelton smoking a cigarette hangs on the east wall, serving as a reminder to disgruntled writers who spend too few hours putting words on paper. 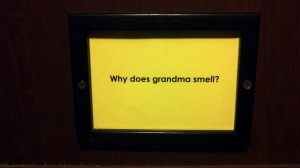 The Bitter End is one of the more unique coffee shops in Grand Rapids, and it offers a special combination of history, coffee and chain smoking patrons. If you need a quaint spot to waste away afternoon, or are looking for a quiet venue to pull an all-nighter, look no further than the gargoyle guarded walls and slightly leaky tin ceiling of the Bitter End Coffeehouse.